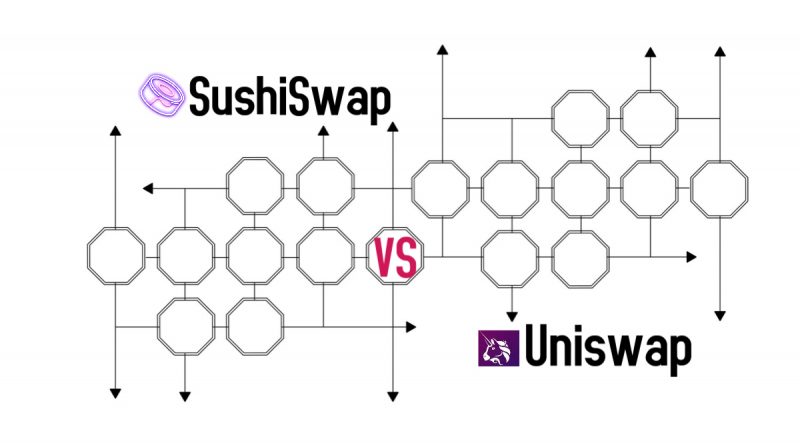 With the gaining popularity of the blockchain and crypto industry, there have been various new innovations in the crypto market. One of the most significant innovations that occurred in recent times is decentralized exchanges (DEX). DEXes are a beneficial venture as they help us in getting rid from risky custodians and centralized platforms.

When talking about DEXes it’s hard to ignore SushiSwap and UniSwap, the two biggest service providers of DEXes, and also competitors. SushiSwap was developed as a clone to UniSwap, hence there are a lot of similarities between the two, but now they are formidable opponents. Both have certain similarities, and both have their unique features.

It is a DEXes platform that can be used to deposit funds and use them to swap currencies for a small amount of fee. Two Ethereum-based currencies are assigned to each pool as a token pair.

The fee is earned by liquidity providers (LPs), there are those who make deposits, they are compensated for the swaps for which they provided liquidity.

The liquidity pools of UniSwap are Ethereum smart contracts. These smart contracts automated market making, and the code handles all the swap features.

Initially, SushiSwap was just a clone of UniSwap. There were a few alterations with the user interface; it was for this feature and some other features that many users made the switch to SushiSwap initially.

SushiSwap was made public in August 2020, and within just a few hours of its inception SushiSwap attracted billions of dollars in staked liquidity. Many LPs abandoned UniSwap to join SushiSwap. The main reason for this swap was because SushiSwap was still giving some token distribution benefits that UniSwap was not giving anymore. LPs providing liquidity for SushiSwap pools was more profitable, especially in the short term.

Both are on Ethereum block chain and are decentralized automated market makers. Both allow currency swaps by utilizing liquidity pools made by other customers of the DeFi ecosystem.

Both platforms offer fees to LPs on the swaps for which they offer liquidity.

V3 enables concentrated liquidity positions to be represented by NFTs and stored in Ethereum wallets, in the same manner as UNI, ETH or any other NFT is. Concentrated liquidity positions have not been attained by any other legacy financial institution before, thus making UniSwap and DeFi among the most innovative ventures in the financial industry.

SushiSwap is a platform for yield farming. In yield farming, a wrapped token which serves as a representative of real token, can be staked, multiplying the yield. This is referred to as yield farming and the farming pools offer an annual percentage yield of 96%. But it can be a risky approach and should be only implemented under extreme cautions.

In UniSwap there are several fee tiers, and is fully paid by the LP. Whereas in SushiSwap 0.3 % charge is levied for exchanges, out of which LP gets 0.25% and the remaining 0.05 % is given to the token holders. For token holders SushiSwap is a better option and for LPs, UniSwap is better.

The exchange experience in UniSwap is much cleaner, faster and straightforward. In SushiSwap, the experience is very innovative but chokes the interface of the exchange in the end.