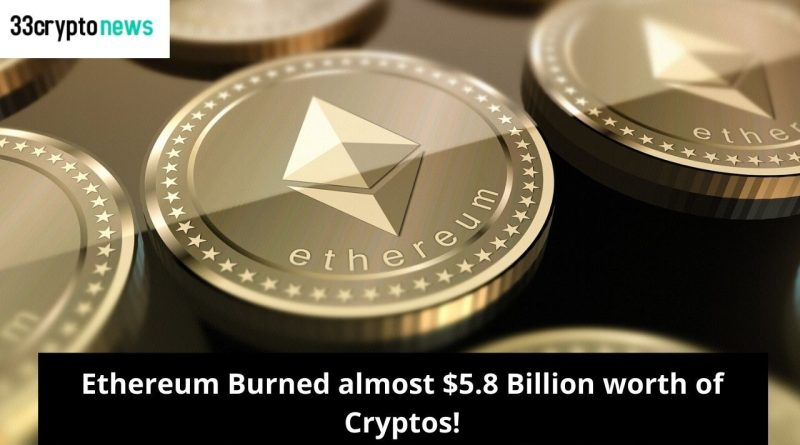 People who are aware of the cryptocurrency domain have surely heard of the term crypto burning or coin burning. It is a technique in which you cut the coin’s supply that gained momentum in 2017. Whether it is a good or bad thing for investors is a different question altogether, but recently one of the most important pieces of news related to crypto burning that investors should know about is that Ethereum has officially burned more than 2 million ETH tokens with the help of burning mechanism that was introduced last year. The crypto is destroying a part of its own supply and has cut down to 65% of the new insurance of its currency. Ethereum, which is more than equivalent to $5.8 destroyed, burned, removed from circulation.

The reason behind Ethereum burning 5.8 billion worth of its own tokens?

If you are thinking Ethereum is just setting a stack of money on fire and relaxing, then you have to rethink it. Cutting down on the amount of available money is part of a heterogeneous approach to upgrade the blockchain and cut down the amount of currency that miners can get from each transaction. The EIP 1559 allow Ethereum developers to create a new system under which transaction fees that were conventionally all paid to miners were split into a base fee and a tip to the miner. This system helps in preventing the miners from entering the network with spam transactions that can lead to raising the minimum fee for others.
Apart from that Ethereum is about to come up with one of its most comprehensive updated versions. The Ethereum 2.0 aims to improve the lower costs, networks speed, and also its carbon footprint. This version will transform a proof of work consensus mechanism to a completely different model, called the proof- of- stake. This version is more environmentally friendly since it will be needing less power to achieve similar levels of security. The developers are aiming to issue lesser Ethereum tokens onto the market, which will result in increased valuation along with a safer network.

Bottom Line
It may seem like Ethereum is a good option for investment due to its volatility, it is becoming more obvious that the crypto is growing in market relevance, and after its update is launched, its growth will see no sign of slowing down. The Ethereum token burning is just one step towards this transformation. Investors just have to hold on to their seats because Ethereum is getting ready to take them on a wild ride.